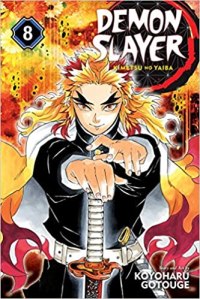 Thanks to the Demon Slayers, the Train of Infinite Dreams has been derailed, but Tanjiro stays Inosuke’s hand when he would kill the demon responsible. Tanjiro says “he’s suffered enough”. The demon blames Tanjiro for what happened, but most of all he blames Rengoku. Although Tanjiro is injured, he is encouraged by Rengoku to keep doing his best, which words he takes to heart.

But it’s not all over, not when a higher rank demon suddenly appears! Impressed by his strength, he tries to get Rengoku to become a demon. If not, he plans to kill him. Rengoku warns Tanjiro to stay still, so he can heal, and not to get involved in this fight. As morning approaches, and with it the light, the demon fights even harder, and although Inosuke and Tanjiro join in the battle, the results are not as they would wish.

Rengoku tells Tanjiro that he believes in Nezuko, having seen that she is good, and  not to grieve over him. But of course Tanjiro grieves, as so the other Hashira. Meanwhile the demon reports to Lord Muzan, who is currently using the appearance of a child. Muzan isn’t impressed with the death of one demon slayer – he seeks the death of the entire corps.

Entrusted by Rengoku with messages for his father and brother, Tanjiro slips away, although not fully healed, in order to comply with Rengoku’s wishes. While his brother is sad, Rengoku’s father is angry and denounces his son as worthless. He takes out his frustrations on Tanjiro. And if that wasn’t bad enough, Tanjiro has to face Haganezuka again!

Tanjiro stops Ranao from being kidnapped in order to go on a mission,  but finds himself volunteering in her place, and he is joined by Inosuke and Zenitsu.  Oh-oh, what’s up now?

This volume was unexpected due to the loss of some we barely got to know. Much sadness, but that, of course, is a part of life., which is one of this manga’s strengths. The good don’t always win and the bad don’t always lose.  Tanjiro is growing as a character, but to are Inosuke and Zenitsu.  I am curious to see what mission the three will undertake next, and who is this guy with the unusual bejeweled look? Good volume, looking forward to the next one.