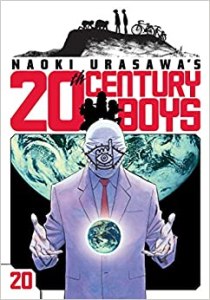 Yukiji decides to close her dojo, to the dismay of her students. She tells them how proud she is of them and what they have accomplished then leaves them with the words of her hero: If you ever feel your life is in danger, just turn around and run like hell. She meets with Kanna, Yoshitsune, and Otcho, and tells Kanna she knows what she intends to do and she is coming with her. But first she advises her there is someone she needs to speak with first—namely, her mother.  She also says that Maruo is on his way there to find her even now.

Maruo finds himself at an armed checkpoint that is flying a flag with a frog on it? What the heck? Could it be? He requests to be taken to their leader, even though they try to shoot at him, claiming he knows him. And he is right. It’s none other than Keroyon.

In the year 2000, Kiriko has given birth to a beautiful baby girl. Her baby daddy, Fukube, is acting strangely, going out for mysterious reasons. She follows him one night and sees his performance as Friend… and she is concerned. Now, in year 3 of Friendship era,  she wants to atone for what she unwittingly did back then. She has a vaccine she hopes will cure the new virus, but there is only one person she is willing to try it on.

Meanwhile, Kanna, Otcho, and Yukiji have gone to assassinate Friend, whoever he is. But Kanna has her own agenda, which does not involve risking anyone else’s life but hers. She faces down the Friend while Otcho and Yukiji  try to find her. They are confronted by Takasu, who reveals to them that Manjome is dead and they did it. Takasu’s agenda is simple. She wants to be the Holy Mother. Otcho and Yukiji escape, only to find an even greater secret, one that’s sure to play into Friend’s story about aliens coming to destroy them. What in the world is going on here? And what do the evil twins Yabo and Mabo have to do with anything?

We’re getting down to the wire, everything is coming to a head. And all indications point to the pivotal piece of the puzzle being Kenji. He is the one who will save the day. At least, that’s how I see it. He began it, with his Book of Prophecy. It’s only fitting that he be the one to end this madness.

Two more books to go, and then we’ll know all.