The Way of the Househusband, Vol 6 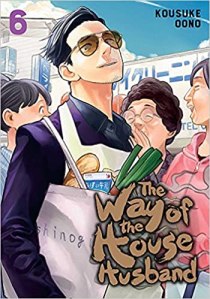 One of Miku’s friends confides to her that she and her husband have a problem with budgeting, as they tend to spend everything they make. So Miku, in order to help her friend, brings in an expert on the subject—Tatsu! He shows her the tricks he has learned, but couches them (as usual) in a way that makes her think he is referring to his Yakuza roots! Should she be afraid of what he wants to show her?

A member of a women’s organization approaches Tatsu. She thinks it’s time to open up membership to men. She invites him to attend the meeting of their board members, known as the Eight Dragons, to plead his case. However, when he does, one of the ladies objects. It’s up to Tatsu to win her over!

The creators of Policure, which Miku loves, are running a special promotion. Go to one of the participating toy stores and say this phrase “You’re not getting away. Coming to catch you” and you can received a special DVD. But Miku has to work, so she begs Tatsu to go for her. He agrees, but manages to forget the catch phrase before he can say it. He is saved through the intervention of a friendly guy, who then tells Tatsu another store has a different special promotion, but it requires two people to participate. Would Tatsu like to team up with him? For Miku’s sake? Of course he would!

Tatsu agrees to help out one of his contacts by bringing his Shiba, named Kotetsu, into the family on a temporary basis. When he posts pics of the cute dog, the pics are immediately noticed by someone who becomes jealous. He and his dog meet up with Tatsu and Kotetsu to compare dogs. And then he steals them away…

The owner of Café Jingi Tei wants to expand his menu to draw in women and the younger crowd. So Tatsu takes him to another café he knows of, Creamy Café, to show him how they do it. The two men compete to see who isn ‘t afraid of being less than manly by ordering some of the feminine-sounding dishes. Afterward, Tatsu makes a couple of dishes for the owner, and he is pleasantly surprised by the memories they invoke.

When Tatsu suspects Masa has a toothache, Masa lies, so he won’t have to go to the dentist. How long can he fool Tatsu?

Tatsu and Miku watch Top 100 Ghost Videos before bedtime. Miku is creeped out, but Tatsu says that’s nothing. Until he can’t sleep. Everything he tries to count becomes a violent Yakuza reference. So he decides to get up and make a little snack, which quickly becomes a meal. Will this work?

Faced with a table loaded with bread, Tatsu asks Miku what’s going on? Apparently there is a spring bread festival being sponsored by Yama Bread. You can collect the tickets to enter their sweepstakes in their products. Ten thousand lucky winners get Policure plates! Tatsu enlists Masa’s aid, but how much bread can three people really eat? Or can Tatsu do something to change it up?

Alarmed at reports of a groper in the neighborhood, Miku wants Tatsu to teach her self-defense. But what he tries to teach her isn’t quite what she had in mind. Leaving late from work one day, she finds herself accosted by a man, and begins what she perceives as a fight for her life… not recognizing poor Masa!

Another wonderful volume! I never get tired of Tatsu, or of seeing what he’s up to. Already pre-ordered the next volume, can’t wait for it to come! Please keep writing Tatsu forever! Look for bonus stories at the end. You can see it on Netflix too, both the animated comic and a live version. I prefer the animated comic, to be honest, as the other is too short and is really just Tatsu’s household hints minus the story.