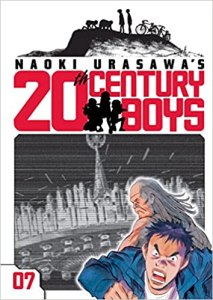 Otcho and Kakuta struggle to escape from the island prison of Umihotaru. Kakuta is determined to become a famous manga artist, while Otcho’s desire is to get revenge for a friend. Once they reach the water, Kakuta is sure he can’t possibly swim the distance required to get to freedom, but Otcho tells him the story of his friend who beat him in a swimming competition, and the friend couldn’t even swim! Meanwhile, the warden has learned of the escapes and while he is not concerned with the manga artist, he is upset about Prisoner #3, and wants him back as soon as possible, or else…

Back in 1970, Kenji and his friends are planning to see the Exposition in Osaka. Since time will be at a premium, and lines long, they have to carefully arrange their time to see as much as they can. Donkey confesses to Kenji that his parents can’t afford for him to take the bullet train to Osaka, and asks to borrow Kenji’s bike, to which he agrees. When Otcho and Kakuta reach the mainland,  years later, they find, to Otcho’s amazement, a recreation of that very Expo, with one important exception.

In 2014, a class in a Tokyo high school is given an assignment to write an essay on the Japanese history topic of their choice. Koizumi, caught trying to sneak out of class, chooses to write about Hitler, but her teacher won’t allow that, so she picks up a book at random and points to her “choice” for her subject, which turns out to be Endo Kenji, leader of the Kenji terrorist group that unleashed Bloody New Years Eve in 2000. The teacher objects, but Koizumi insists, claims she always found the official story of that night suspicious, including the iconic photograph of the group who was supposedly controlling the giant monster threatening to destroy Japan. Koizumi isn’t doing well in class because she constantly skips school in order to follow bands that she loves. A classmate of Koizumi’s tells her about another student who went berserk during a discussion of Bloody New Year’s Eve. Her name was Endo Kanna! Koizumi has some research to do!

When Koizumi runs into Kamisama and learns he knew Kenji, she has to learn more!  Back in 2000, Kenji and his friends prepare to save the world from the Friends. They need to find the remote that controls the monster that is destroying Japan!

On top of worrying about Kenji and what has happened to him and the others, we have to deal with Otcho and Kakuta and their ordeal in the current situation, still not knowing exactly what happened in the past. Plus we have a new character, Koizumi, who I feel is going to play a part in revealing the truth about the so-called Kenji terrorist group. I have to hope and believe that Kenji and the others survived whatever put Otcho in prison, and that they will yet emerge to save the day and defeat the evil Friends. Also, Kenji and Yukiji will finally get together!

Another great volume, can’t wait to read the next one!