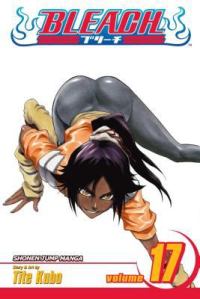 The countdown to execution has begun! No time to lose if Rukia Kuchiki is to be saved! Renji is determined to save his friend, even if he has to go through Byakuya, his captain, to do it. Byakuya is confident in his ability to defeat Renji, but Renji has been training with Ichigo and has a few surprises up his sleeves!

Kenpachi is happily facing the masked Komamura and the blind Tosen. Finally, a real challenge! As Rukia is being led to the Sokyoku, across the bridge, she encounters Gin Ichimaru, who can’t resist a last chance to tease the condemned Soul Reaper. He informs her that Renji is still alive, and offers to help her.  Reaching the Sokyoku,  she is asked if she has anything to say, and makes a last request.

Realizing Captain Tosen has used his bankai, Hisagi wants to go to him, but Yumichika tells him they are not finished. When Tosen questions his abilities and standing in his company, Yumichika enlightens him as to why he holds the position that he does. In fact, Yumichika will show him something, if Tosen promises not to tell the other members of his squad.

The execution has begun. It’s now or never, if Rukia is to be saved.

This volume is becoming a real nail-biter as Ichigo and friends battle to save Rukia from what they consider to be an unwarranted execution. Ichigo is conspicuous by his absence, still working to learn how to bankai. But he has an indomitable spirit and refuses to consider failure to be an option. No doubt we’ll see him in the next book.  Tosen’s backstory is poignant, and the revelation of Komamura’s actual face is enlightening. You can’t help but love Yachiru, the way she refers to Orihime as “Chubby”, and calls Ichigo “Itchy”. Although perhaps that should be translated as Ichi. It’s hard to tell, and translation can be a tricky thing.

There are so many questions here that beg to be answered. Is Rukia’s so-called infraction really of such a serious nature that it requires her execution? And, if you go with the idea that Soul Society is a sort of heaven, where the dead go, and that therefore the Soul Reapers themselves are not alive and not human, then how can she be executed and what does this really mean to them? Why is Byakuya such an uptight and cold monster, who is willing to see his own sister lose her life?

Plus we still have the mystery of who killed Captain Aizen. We know it wasn’t Ichigo and Company, despite what the Soul Society thinks. So who is the killer, and why was he killed? So many questions, so few answers. .. yet.  Something’s gotta give, hopefully in the next volume.

Looking forward to the big event, be there!