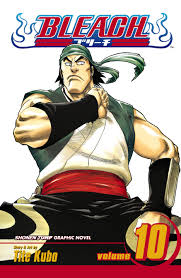 Ichigo is confused when he learns that the person who is going to help them get into the Seireitei is a fireworks expert. What use is that? Turns out she plans to use her expertise to launch them through the sphere that surrounds their target. But they all have to be able to create a reishukaku – a spirit core – which means training for everyone. And Ganju is to help them. When the others stop to eat, Ichigo persists in continuing with his training and Ganju remains, to Ichigo’s annoyance. Ganju confronts Ichigo and demands to know why he is working so hard to save a soul reaper.

The Thirteen Court Guard Squad captains and their lieutenants have been instructed to assemble in full insignia. The captains question Gin as to how and why he let a ryoku past him, although Gin seems unconcerned by their anger. When the Head Captain asks for an explanation, Gin has none to give. An intruder alarm interrupts the discussion, as everyone rushes out to see what’s happening.

After a short rest, the team is ready to be catapulted into the Seireitei! Kûkaku warns them that they must keep their focus and not let their energy level grow too strong. Yuruichi cautions them to stay together inside the Seireitei and avoid confrontations with anyone of captain level. (Famous last words!)

Their entrance does not go unnoticed.

Despite their best efforts, the group becomes separated into smaller groups. Ichigo and Ganju come up against Ikkaku and Kamichiki. Ganju decides to run, and is chased by Kamichiki, while Ichigo faces Ikkaku in battle. How will Ichigo fare against such an opponent?

This volume of Bleach sees our heroes training for entry into the Seireitei in order to rescue Rukia from her death sentence. As usual, Ichigo never stops to think what the consequences might be. He sees what he thinks has to be done and he decides to do it. He has a very strong sense of loyalty and commitment, especially when it comes to Rukia. But then again, we have to remember he’s a fifteen-year old teenager. At that age, they think they’re invincible. Although I will admit that Ichigo has a better sense of life and death than most young people since he can see dead people.

Watching Ichigo and Ganju go at it is hilarious! Ichigo makes friends easily but he can also rub people the wrong way until they get to know him. One thing I’ve learned with this series is don’t necessarily trust your first instincts when meeting a character, things are not always what they seem. And that works both ways. The person you thought was so nice and good may turn out to be a major league villain!

I love the battle between Ichigo and Ikkaku. And I love what Ichigo tells him when Ikkaku wonders why he didn’t run, like his friend, which he considered a smart move. Ichigo replies: “If your power is greater than mine, then it would be pointless to run ‘cause you’d catch me for sure. But if your power is less than mine, then I just have to beat you.”

This is the beginning of a lengthy arc involving the rescue of Rukia, but it’s a very interesting one in that we become familiar with the captains and lieutenants of the Thirteen Court Squads. We’ll be seeing a lot of them, trust me. And when we get to the one I’m crushing on, I’ll let you know lol

Another great volume of Bleach, looking forward to the next one.