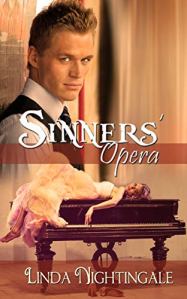 When you have all the time in the world, you can learn to do many things. And if you make the right investments over the course of many years, you can live like royalty. Although Morgan D’Arcy really is royalty, being a peer of the realm, a British lord. But he’s also a world-renowned accomplished pianist. At least in this “lifetime”, he is. Morgan is also a vampire, which means that because of his longevity—read immortality—he has to reinvent himself every so often. People get suspicious of someone who never ages, even the good-looking ones. And Morgan is undeniably good-looking. Just ask his good friend and mentor, Lucien.

But there is something Morgan wants more than anything else, something he has been unable to attain. Or should I say who, for Morgan’s obsession is with a woman named Isabeau. A woman he’s been watching and guiding since before she was born. She knows him, but not as Morgan. To her, he is Gabriel, the man who visits her in dreams. Who watches out for her and cares for her. With his help, Isabeau has become one of the foremost leading geneticists in the country, if not the world. With her help, Morgan hopes she can cure the genetic defect which keeps him from siring an actual child, and together they can have a baby. But how to explain all that to her, as well as the truth about what he is?

Isabeau has been quietly in lust with her Gabriel for a while now, but it’s hard to have a relationship with someone who comes and goes at his own whim, and who leaves no real evidence that he’s ever been there. She has her job, of course, and her friends. And a boyfriend she plans to marry. But Gabriel… he’s so much more. If only she knew if he were real or just a figment of her lusty imagination.

Morgan has very strict rules under which he lives, enforced by a council of vampires which includes Lucien. He’s spent his various lives doing pretty much as he pleases, within the parameter of those rules—it’s easy to live dangerously when you know you can’t die. From fast horses to fast cars, as technology progresses over the years. Women of all sorts, his for the taking. But something has changed. Now he has so much more to live for… and he’s willing to break the rules in order to have that.

This can either be a love affair made in the heavens or one with origins a little bit south of that….

I have to say that I fell in love with this book from the beginning, particularly with Morgan D’Arcy. He is sexy as hell, so charming it should be illegal, and yet possessed of a certain vulnerability that makes you want to hug him close (before turning to other activities, of course). I love the world this author has created with its own vampires and their own unique qualities. There are many vampire stories out there, but this one stands out to me. Linda Nightingale knows how to make us see and feel what she’s writing about, very vividly, on a very visceral level. I felt as though this book ended far too quickly, I just wanted it to go on forever. At the same time, it’s dramatic, romantic, intense, and heartbreaking.

If you enjoy romances, if you love vampires, if you love drama and excitement and characters who both attract and repel, I highly recommend this book. Morgan D’Arcy is like a drug, one I cannot get enough of. I hope there’ll be many more books featuring this enchanting man!