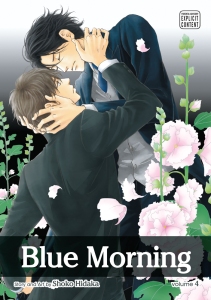 Akihito has moved into humble lodgings, occupying part of a house once owned by Ishizaki’s old housekeeper. As far as the servants at the manor know, he is staying at the Ishizaki villa. This is a brand new world for Akihito, who has no practical knowledge of how anything works, including such basics as using a sink or a stove. He has a lot to learn! The reason for downgrading his lifestyle is that Akihito plans to relinquish his title in favor of Katsuragi, which he confides to Ishizaki, even as he strongly impresses upon him that Katsuragi must not find out.

Akihito confronts Amamiya at the manor. Amamiya is surprised that Akihito bears him no animosity, considering that he has been working to ensure Katsuragi inherits the Kuze house, unaware that Akihito has the same goal. His surprise becomes even greater when Akihito makes Amamiya the new butler of the Kuze household. However, Akihito is adamant that Amamiya not use Katsuragi’s old room.

Katsuragi has taken on the task of instructing Ishizaki, as once he did Akihito. While discussing the arranged marriage for Ishizaki, Katsuragi reveals knowledge of ishizaki’s true love, a geisha, and tries to tell him that he can have both. Ishizaki laughs, saying that is what Kuze has said too, so why can’t the two of them manage to do that themselves? Katsuragi has no answer to that, and Ishizaki silently wishes he could do something to help the two of them.

Getting into an argument with Katsuragi, Ishizaki inadvertently lets on that Akihito has done something stupid because of his former butler.  Learning the truth, Katsuragi goes to see Akihito in his new home, and Akihito serves him tea, while trying to gauge how much he knows. Akihito confesses to burning some bridges and the reason for doing so. Not surprisingly, a heated discussion between the two men ends with passion. The next day, Katsuragi is convinced he knows what he must do in order to save the Kuze house, but he must act quickly.

When Akihito returns to the manor, he is annoyed to learn Amamiya is in Katsuragi’s old room. But when he goes to confront him, he is surprised to find Katsuragi there as well. Amamiya leaves the two men alone, and they discuss the future of the Kuze house, which will necessitate their working together. Katsuragi makes the first move this time, and passion once more holds sway, which leads to a surprising admission on Katsuragi’s part.

It’s interesting to watch Akihito and Katsuragi go to such lengths, each for the other. It reminds me of The Gift of the Magi, in which a young couple each sacrifice something of value to them in order to give something of value to the other, but the sacrifices negate the gifts, leaving only the love. I’m hoping that’s how this turns out for these two. From the bottom of my heart, I want nothing more than for them to end up together, whether at the Kuze manor or somewhere else. I’m not sure they’re at that point, and it won’t be an easy road to happiness, but I believe they can do it. I love the passion between the two men, and the way Akihito doesn’t care about status or lack of it, he loves the man Katsuragi is and wants to be with him forever, even if he forfeits his own status and wealth to do so. Akihito is the seme in this relationship, and I wonder if Katsuragi’s accepting the role of uke is indicative of something in his past which we aren’t privy to yet. Only time will tell.

Ishizaki is proving to be a very good friend to Akihito. I have to believe his words spoken in anger to Katsuragi were simply a Freudian slip and that he wanted Katsuragi to do just what he did, in the hopes he would be able to talk some sense into Akihito. And now, with another candidate for head of the Kuze household looming on the horizon, what happens next remains to be seen. We’ll have to meet this other person to get a sense of his worth, or even his willingness to assume the Kuze title.

Wheels within wheels and a great deal of machination going on. Where will it end? No one knows. Loved this volume, can’t wait for the next one.