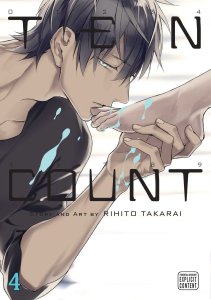 Shirotani has gone to Kurose’s apartment, ostensibly to watch a movie, but did he seriously think Kurose wouldn’t try to take advantage of the situation to touch him in some way? On some level, he must have known that would happen. So when Kurose introduces him to an anal plus, Shirotani’s protests are weak at best. Once the plug is in place, Shirotani is both disgusted and turned on. When Kurose removes the plug and suggests he replace it with himself, Shirotani fights against the idea, claiming Kurose is manipulating him. To his surprise, Kurose claims that Shirotani is the one who is actually in control. Shirotani worries that if he becomes cured of his germophobia, Kurose will lose interest in him.

Shirotani leaves, but doesn’t get very far in his turgid condition and, against his better instincts, enters a public lavatory, torn between not being contaminated by his surroundings and relieving his need. As he fantasizes that Kurose is touching him, he replays memories in his mind, of his childhood, and the incidents which were the start of his germophobia.

Avoiding Kurose, Shirotani throws himself even harder into his work. The weather has turned ugly and there is talk of an impending typhoon. Shirotani’s boss apologetically asks him to deliver some urgent documents to a client, which of course he does.  Leaving the office of the client, heading down in the elevator, he sees Kurose come on but keeps his back to him, assuming Kurose won’t know him. Unfortunately, a power outage halts the elevator, and Shirotani is forced to face his fears, as well as Kurose. Can they reach a new understanding of their relationship together?

Another great volume of this series. More and more we are beginning to understand what drives Shirotani to be the way he is. It’s hard not to feel sorry for him, and also to hope he can be cured of his fixation. I believe he is fixable, and that Kurose is the key. I suspect there is more to Kurose than meets the eye. He’s already admitted to being attracted to Shirotani in large part because he is a germophobe, but there must be more to the story than that.

Some people might argue that there is some dubious consent here, but after careful consideration, I don’t believe that to be the case. While it might appear that Kurose is going against what Shirotani says, I believe he is receiving his cues from Shirotani, as he claims, and Shirotani is actually setting the pace and controlling the action. There is also the matter of Item number ten on the list, which has yet to be named. I’m not sure it ever will, but I hope so.