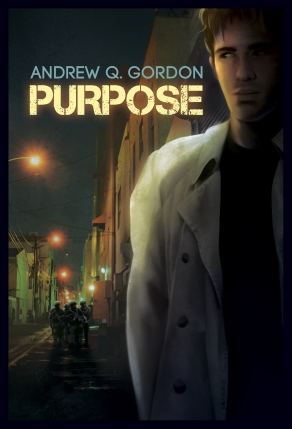 Forty years ago the Spirit of Vengeance—a Purpose—took William Morgan as its host, demanding he avenge the innocent by killing the guilty. Since then, Will has retreated behind Gar, a façade he uses to avoid dealing with what he’s become. Cold, impassive, and devoid of emotion, Gar goes about his life alone—until his tidy, orderly world is upended when he meets Ryan, a broken young man cast out by his family. Spurred to action for reasons he can’t understand, Gar saves Ryan from death and finds himself confronted by his humanity.

Spending time with Ryan helps Will claw out from under Gar’s shadow. He recognizes Ryan is the key to his reclaiming his humanity and facing his past. As Will struggles to control the Purpose, Ryan challenges him to rethink everything he knew about himself and the spirit that possesses him. In the process, he pushes Will to do something he hasn’t done in decades: care.

Three ‘prequels’ are available as a free read from the authors website:

Someone died tonight. An innocent. Someone who should have lived. I felt their death. I feel all the innocents who die. They call out for vengeance.

Standing in the middle of an open space, I barely notice where I am. It doesn’t matter. This neighborhood is like a hundred others, a thousand others I’ve visited around the world. Drugs are sold here, and people fight for “turf” as if there was nothing else out there. This could be anywhere, but it’s Washington, DC. PCP is the poison they sell here, and they sell a lot of it.

Their curiosity has a hint of fear. They don’t know what I am. Am I a cop? Is this a setup? This is the part I like most, where my very presence makes them uneasy. Who stands silent in the middle of the field? I’ve been here five minutes without speaking or moving.

They have no answers, only questions. In that we are alike.

Someone died tonight. An innocent. Someone I’m here to avenge.

Movement on the street. They made a decision: not a cop, not a buyer. My presence is now irritating, bad for business. Like a pack of hungry jackals they come at me from all sides. Too bad for them. They should have stayed hidden.

Cautiously, they approach my position. Why move when they’ll come to me? They’re not smart enough to understand what’s happening, but it’s not their fault. This place is all they know, and this is how unwanted strangers are dealt with around here.

Three walk up to me, trying to keep me from noticing the four who are sneaking up from behind. Two of the three have guns, tucked into the back of their pants. The third has a chain. Two more guns approach from behind, along with a tire iron and a bat. Fools. Such punchless weapons can’t kill me. By the time they learn, it will be too late.

Of the seven, only one is my target. He’s in front of me. His friends are guilty by association. If they run, maybe I won’t follow them, not today at least. Not unless they kill an innocent person.

It’s time to clear my mind, get ready. I want this over so I can leave.

Someone died tonight. An innocent bystander who was not part of the violence. The killer is among them. I can feel it.

The speaker is my target. He already has his gun out. The same gun he used to kill the innocent whom I must avenge.

“Looking for you.” My voice, when I use it, is raspy and cold. Like so much else about me, it has been altered over the years.

“Yes.” There’s no need to explain. I don’t get extra credit for letting them know why I’m here. I prefer to watch them struggle with my presence.

“Either way, you gonna be dead in a minute.”

The four behind me move closer. Now I can smell not just them, but their weapons as well.

They attack first; they always do. So predictable. This time they are particularly stupid. They just don’t know it yet. I convince their minds I’m standing between the two groups, when I’m three feet to their left. They fire at where I am not. Three go down immediately. My prey is not one of them. Let the cops sort that out.

Too fast for any to follow, I move behind my target. Like so many others, he believes there are no consequences, so he does what he wants. So foolish. They’re wrong. I’m their punishment.

Hiding my presence from the other three who are still standing, I take control of the gun in his hand. His friends call out, asking what he’s doing. I answer for him.

“Taking out my competition.” I give them a crazy laugh, the sound a mad person would make. I squeeze the trigger and deliberately miss. My captive knows what he’s doing, but not why. He also knows he’s a dead man.

Stepping back, I release my hold on him just as his friends decide his time is up. This time, he fires at the friends I turned into enemies. One drops, but he’s outnumbered. The gun goes off again. This time it’s firing wildly. It is the last thing he does before the two survivors shoot him repeatedly.

The streets are now silent as the last two dash off. I’ve decided I will see them before I leave. They have something else I want: money. Quickly, I search the dead. They were dealers who kept their money close. Good for me, bad for their families.

Even before the sirens can fill the night air, I am done. Almost six thousand dollars. Not bad, but there is more nearby. A wail fills the courtyard, followed by a dozen more. Their families found out they are dead.

Hidden, I watch as the mothers, sisters, girlfriends race toward their fallen loved ones. “Loved one” is being generous. Three of the five are searched immediately. So much for being missed. When their search finds only empty pockets, their screams grow louder.

Several men, associates of the dead, glide over, searching for signs of trouble. Pawing the dead, they do not find the weapons or drugs they sought. I have those too. Soon they’ll belong to the police.

Amid the confusion, I move further into their den. In this maze of filthy rooms and squalor lie more guns, drugs, and money. The dead told me where to find these things, and I’m in pursuit of my treasure. The police can’t do much, constrained by the law as they are. I don’t worry about such things. I am driven by a purpose I can’t control.

Someone died tonight, someone who was not innocent. Vengeance is satisfied, and the innocent may finally rest.